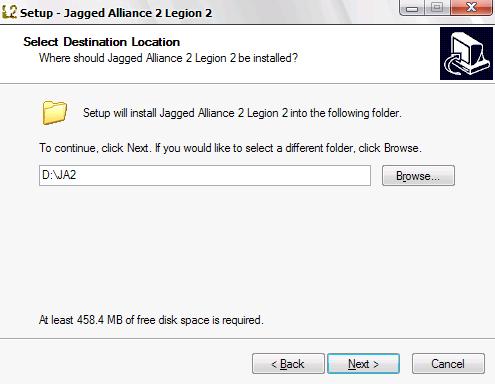 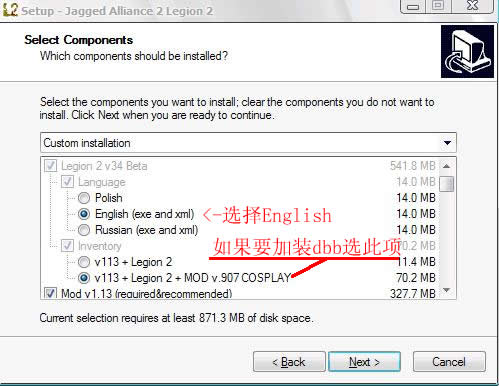 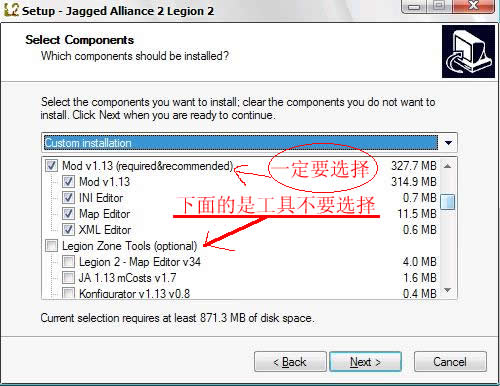 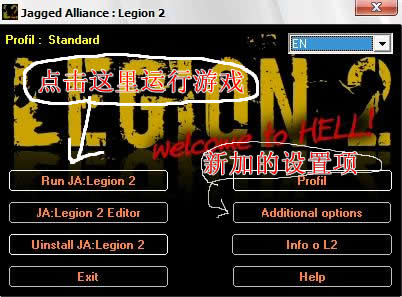 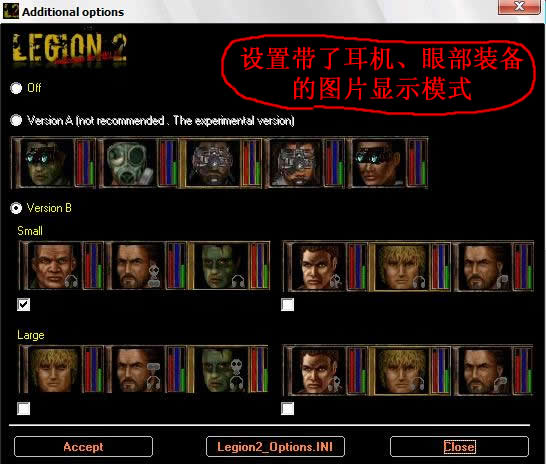 剧情：
Terrorist called Karlos kidnaps daughter of millionaire Oswald (who lives in Torawia) and demands a huge ransom for her. He gives Oswald 30 days to pay the demand, otherwise he will kill his child. The millionaire, knowing that he wouldn't get the money in time, contacts with an old acquaintance - Murray Ebstern. Friend, a former employee of A.I.M., recommends Oswald to turn to this organisation.

Because of some financial trouble, Oswald hires only the cheapest mercs and sends them to Osarwia, where Karlos escaped with the kidnapped daughter of millionaire. The squad starts the search, yet having no idea that they're going straight into a bigger deal, than they might have initially thought...

Beginning of the search

After clicking the "New Game" button you choose how much time you will have to fulfill your mission. The available options are 15, 20, 30 and 40 days or no time limit at all (that's for the beginners). The other options will remain the same as in original Jagged Alliance 2.

After that, you pick a team of mercs and go to Osarwia, starting in K6 sector. There you have to make contact with Alfred, an employee of Oswald, who provides you with all necessary information, including a photo of his employer's daughter. Then... well, then you have to carry on by yourselves.

Welcome to Osarwia, a country full of havoc and chaos, where the government was recently brought down and its place taken by anarchy lawlessness. 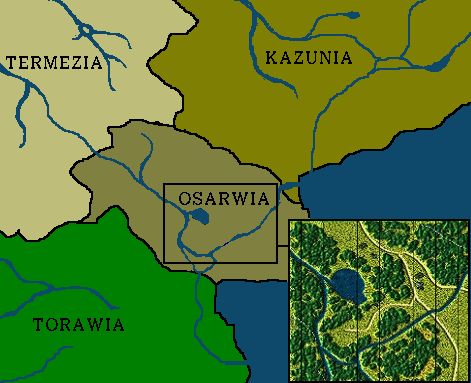 This tiny country used to be under occupation of its neighbor Kazunia, where the dictatorship rules of general Rico Bazac brought him the nickname "Bloody Rico" among his own people. The adjacent countries of Torawia and Termezia claimed Rico's dictatorship as a threat and eventually declared war upon Kazunia, making an intervention in Osarwia.

After two years of bloody warring, Osarwia's independence was restored, Bazac's dictatorship brought down, and the general himself forced to run to the mountains.

Following the independence, a new government is established in Osarwia. However, after 3 years of its rules there is a coup d'etat and the military take the country over. It turns out that it was general Bazac's plot, who had had his men in the army. The adjacent countries, in fear of another pointless war, conduct a complete isolation of Osarwia. Military outposts are established on the borders. Meanwhile, Kazunia starts to reconstruct its former power. And that's the moment when a group of mercs arrives in Osarwia in order to recapture a daughter of their rich employer...

问题帮助：
FAQ
Questions about the game

Found Marie, but I do not know how to join the team?

You have to show her a picture, which we got from Alfred. If you do not have pictures, you probably during a conversation with Alfred not poczekałeś for its completion. To prevent this, after viewing his pictures (which appears on the screen), you must wait until it has completed its issues and will provide a picture.

Sometimes a picture can appear on the earth at the end of a conversation with Alfred.

When I was released from a mercenary, indicated that the equipment left in the camp K6. After returning to the K6 can not find the hardware. Where is he?

The equipment was left in one of the boxes in the K6.

When I play again, I have quite a different sector of the initial?

Always losowany sector is starting. Therefore, each time it may be a different sector than the K6.

Where to get the equipment ordered in the shop?

The hardware is available in the G12, in one of the boxes.

Some figures on the head of such a description "???". What is it?

It is a figure which the player does not know. It was not until after the first interview with a figure appears in her name.

Some characters have names like "Mafia", "soldier." Etc. What is this?

The modification of each character is assigned to any group. This helps to differentiate the bad from the good ones:)

In the face of my hired are some icons?

The icon shows what a mercenary is imposed.

*
- The gas mask and noktowizor

*
- The gas mask and headphones

What's this option "Number of days"?

The player can decide how much to have any days to save porwanej.

How to turn off the lot of statistics?

How to turn off the drawing color uniform?

The walk to the "Data-Legion2 \ TableData \ Profiles" and open the Office file "ini." We look for the "gen1 = TRUE" and set to "gen1 = FALSE".
Questions about installing the game

How to install modifications? 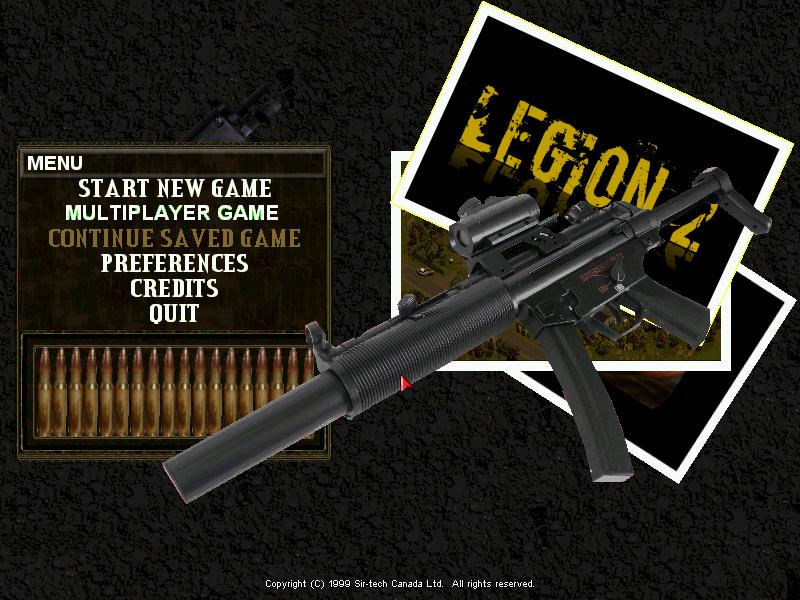 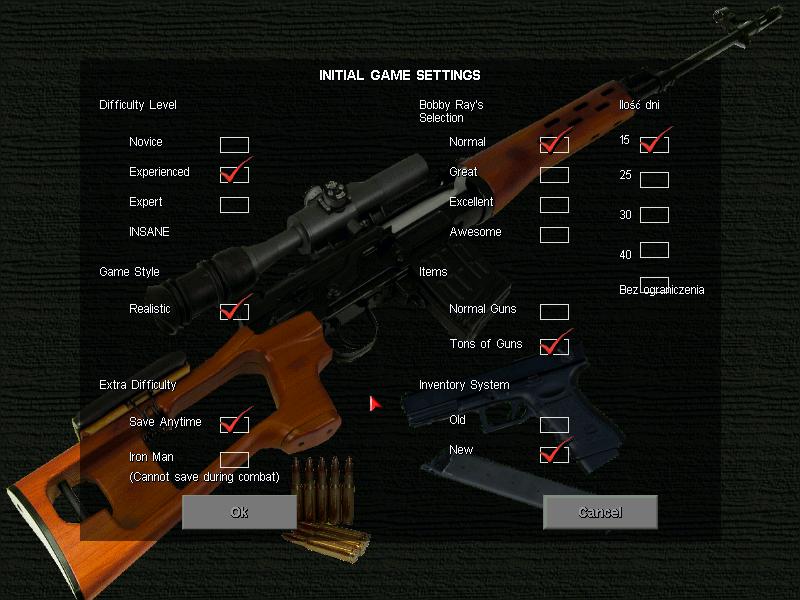 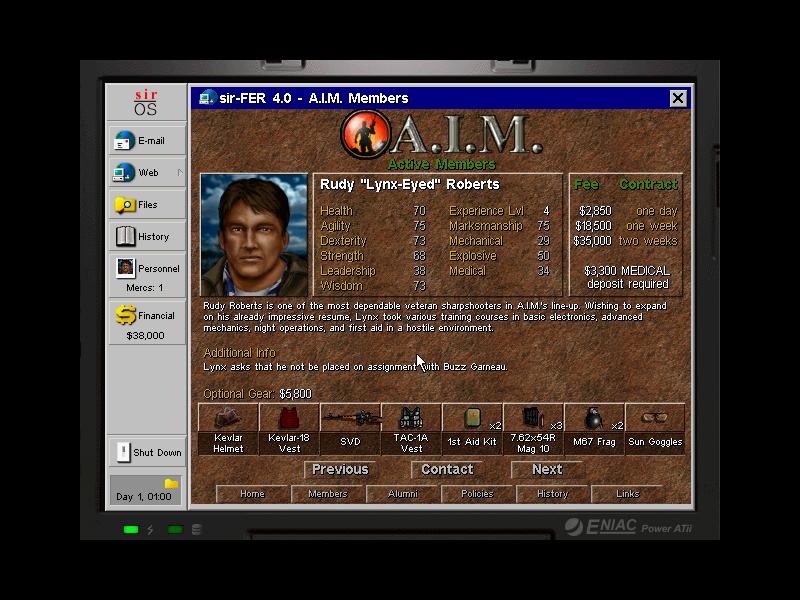 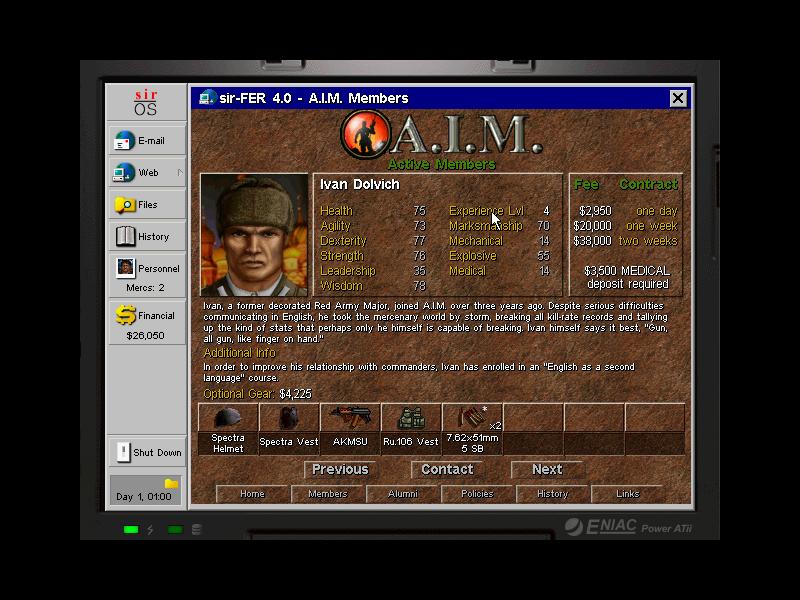 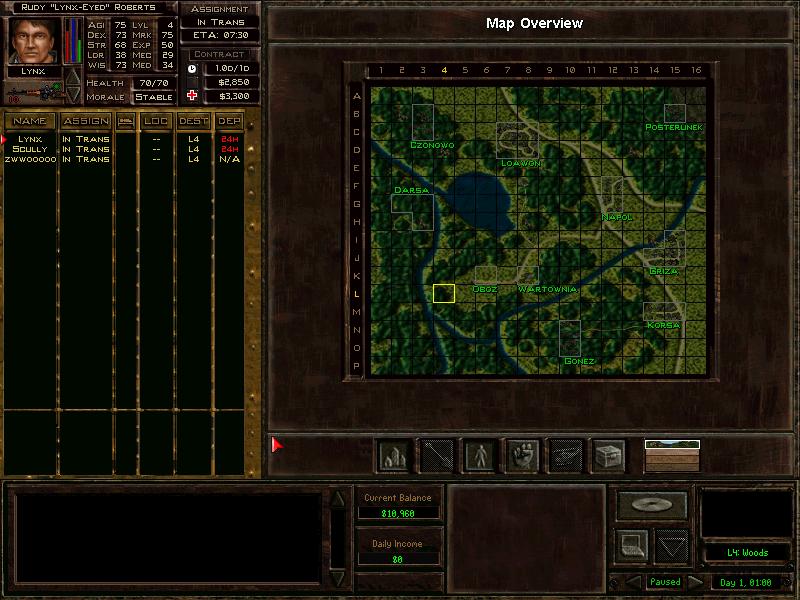 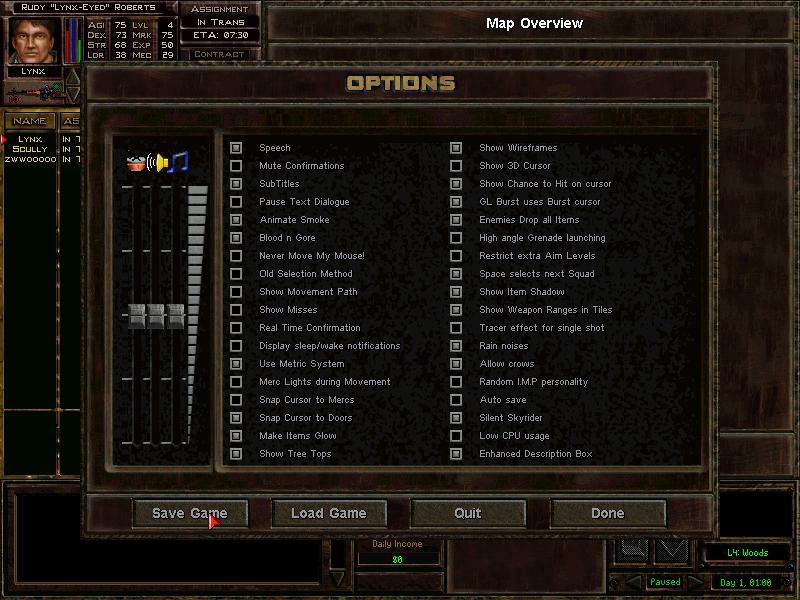 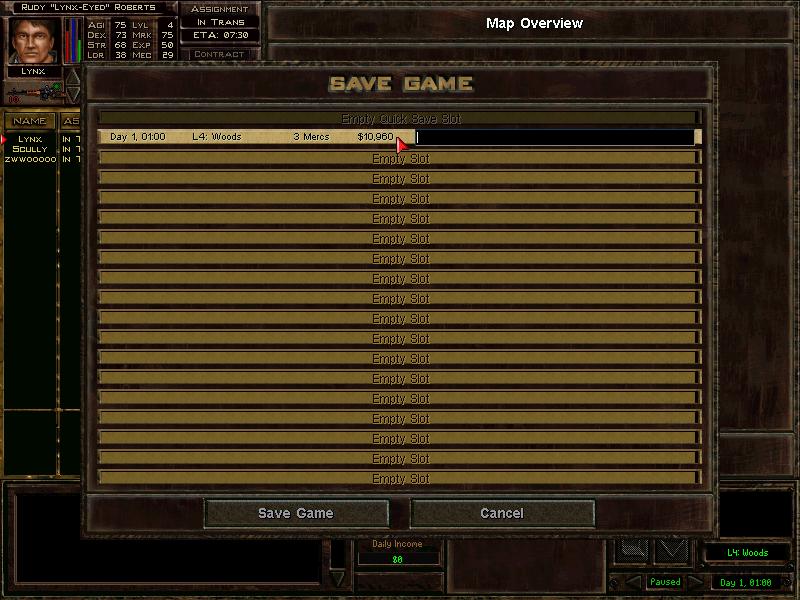 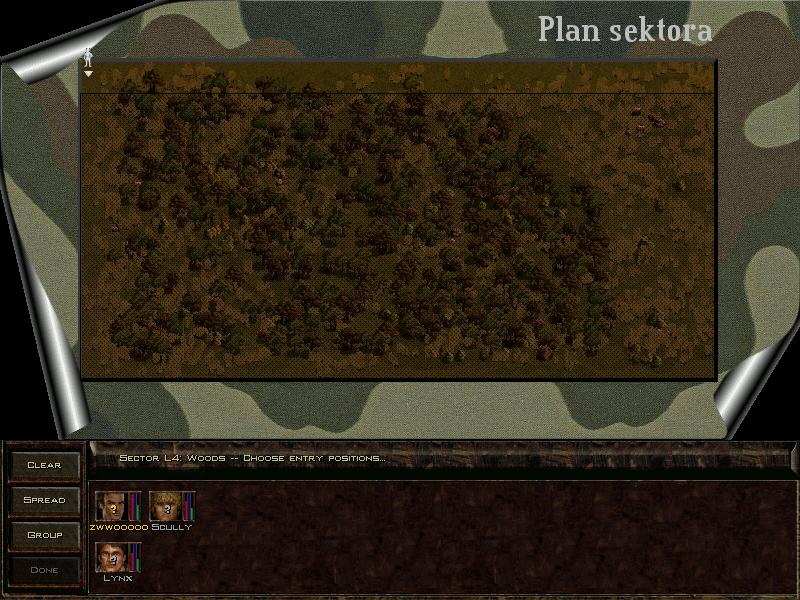 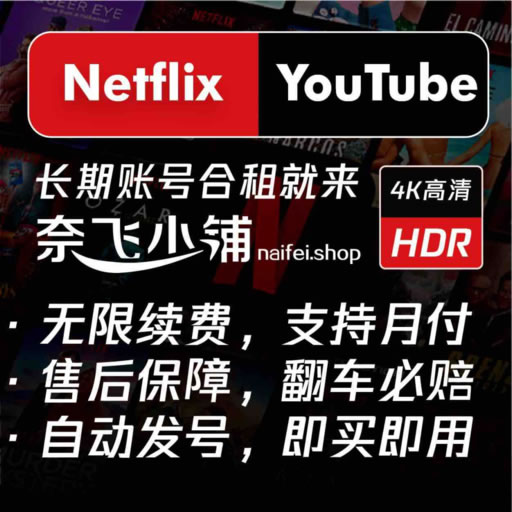